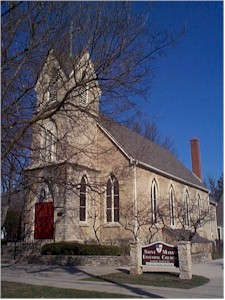 St. Mark's parish traces its history to Geneva's first settlers, Charity and James Herrington. During the 1830s, the first Episcopal services were held in their log cabin near what is now the corner of First and State Streets in Geneva. In 1844, an Episcopal parochial organization was formed in Geneva. Services were held in the old courthouse, site of the old Kane County Courthouse. This parish was the forerunner of St. Mark's Church.

St. Mark's was designed at the height of the Gothic Revival architecture's popularity. The church, built in 1868, represents one of the purest expressions of the form to be found in Geneva.

Standing outside, your attention is drawn to the handsome three-tiered medieval tower at the entrance to the church. At the top is the belfry. There hangs the same bell, cast in West Troy, New York by the Meneely Bell Company, which has called families to worship at St. Mark's since it first opened its doors.

The steeply-pitched roof is characteristic of Gothic Revival. Complementing it are single lancet windows fitted with mullions and glass tracery.  Hood moldings made of limestone cap the windows as well as the entry. The church is built of the local, inexpensive riverstone that was used so frequently in Geneva buildings of the era.

The Geneva Historical Society awarded the building the bronze plaque to the right of the entrance.  A second bronze plaque denotes placement of St. Mark’s on the National Register of Historic Places.  To the south of the church is St. Mark's Memorial Garden, a lovely place for rest and meditation.

As you enter what is now called the Chapel of St. Mark's you are struck by the picturesque quality of the interior. There is an uplifting feeling of lightness and space in spite of the limitations of size. The high rib vaulting and pointed arches lead one always forward and upward. The focal point, emphasized by the arches, is the beautifully-carved wood altar or Holy Table and the cross.

Noted mural artist Louis Grell painted the mural, The Coming of the Holy Spirit at Pentecost, at his Chicago studio in 1919.  The mural, in sections, was transported to St. Marks and affixed to the east wall surrounding the altar.  The original east window was removed when an addition, housing classrooms and offices, was constructed on the east side of the church in 1955.  Cynthia Berry of Kuniej Berry Associates, Fine Art Conservation, of Chicago, Illinois, cleaned and restored the mural in 2018.

The windows of the church are a combination of glass-working styles incorporated into a total design. The majority of the glass is done in grisaille—a traditional window-making style found in many northern European Gothic churches. Unlike stained glass, the delicately painted and leaded grisaille glass allows a maximum of light to enter the building. The windows are a complete set original to the 1868 building.

Music is a very important part of the Episcopal worship service.  Since early in this century singers have occupied the choir stalls at the front of the church.  The chapel organ was installed in 1949 and is a two-manual, 14-rank Aeolian Skinner, Opus 1089.

The caring and hospitable spirit of Charity and James Herrington continues to the present day. As St. Mark’s Church continued to grow, the Chapel seating capacity of 130 was insufficient. More space was needed for worship, Sunday school classrooms and offices. In 1987, C. Edward Ware Associates, Architect, of Rockford, Illinois designed a new addition and sanctuary to accommodate 350 people.

The roof structure of the sanctuary is made up of 12 laminated arched wood frames and wood decking.  Four bays grow out of the central structure: the bay for the main entrance and processional aisle, the bay for Altar, Pulpit, Baptismal Font and Cross, the bay for the Martin Ott organ and the window bay.

The Fellowship Hall was built in 2003 and provides space for Parish events, Kitchen, Choir Room and Educational Classrooms.

Every week, services are held in both the main church and the chapel. Our present rector is the twenty-seventh priest to tend this expanding congregation.